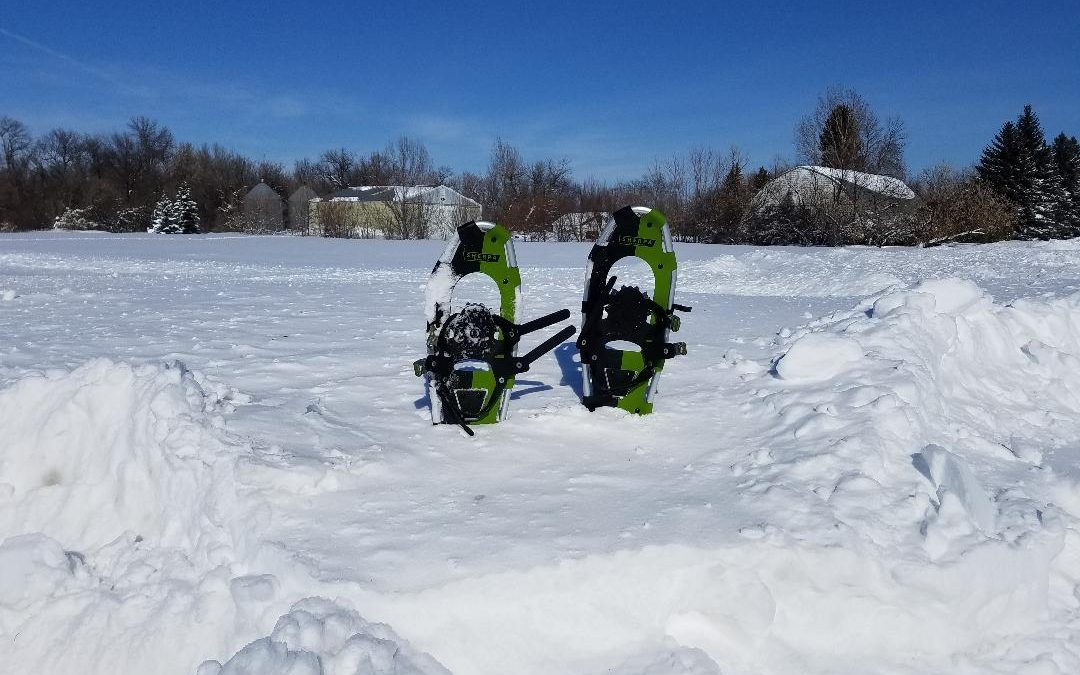 Winter. A single word that many North Dakotans have grown to cringe at. The blistering winds that howl through the prairies and the heavy snowfall that gathers in the valleys can be overwhelming for 6-7 months at a time. If the thought of going out in this weather depresses you, you’re not alone. I myself feel the same. I’d much rather be living somewhere warm and be able to spend my evenings taking the dog for a walk or going for a bicycle ride all year round but sadly that’s not my reality right now and if you’re taking the time to read this, you’re probably in the same boat as me. So now what? Well, there’s got to be a way to get outside and get active to avoid the winter restlessness. Exercise is still an essential part of our lives even if the weather is unpleasant. Many folks have treadmills, ellipticals, indoor bicycles, etc. but, many don’t so where do we turn? Snowshoeing of course!

Snowshoeing has been around since the dawn of time (ok, more like 4,000 years or so) and is an incredible form of exercise; not just a way for mountain men and Eskimos to get around in the deep snow. Most probably think of snowshoeing as something to be used for remote locations but why does it have to be?  Everyone in NoDak has figured out that you don’t need to live at the North Pole or Antarctica to experience ridiculous snowfall and conditions. I’d like to share with you a quick personal story that helped show me that winter isn’t just a hibernation period in regards to exercise and active movement.

I had used snowshoes a few years back to hunt snowshoe hares back home in Northern Minnesota and found it much more practical to get around back in the woods. Funny thing is that, my prey was actually what snowshoes were originally modeled after. Many animals in snowy environments, like the hare, evolved over time to adapt to the conditions in order to avoid predators. This proved to be beneficial for the hares on this particular hunt as it resulted in me going home empty handed. We’ll just say that I was a little less graceful on my snowshoes than the hares were on theirs. I did enjoy the experience though and decided that I wanted to invest in modern snowshoes opposed to the original style wood ones I was attempting to use. For how traditional I felt on the garage sale specials I was on, I knew that a better pair would suit me well and I actually found some on sale and made a purchase.

Here’s where things get a little sad for me. Those snowshoes sat in my Fargo garage for years because I never made it back home solely for a hunting trip therefore never brought my snowshoes home to use. I never had the time while I headed back to visit my parents and in Fargo they were useless to me. Or so I thought… This past winter though, a coworker brought up the idea of snowshoeing and it immediately caught my attention because I was well aware of the wasted money that was currently sitting in my below zero garage. After chatting for a bit on the topic I had been invited, along with another coworker, to go for a walk inside the city limits. My first thought was that we were going to just be walking around in a field in some deep snow but I was ok with giving it a go. My second thought was regarding the blizzard conditions that were going on at the time and how the crazy man I work with was going to make us endure these harsh conditions. I wanted to be a team player though and give something different a try.

Upon arriving at the snowshoeing destination I discovered we’d actually be making our trek along the Sheyenne River in West Fargo and not just an open field as I had originally thought. This area was wooded, protected from the wind, and loaded with snow. We walked towards the river first through an open field which made one feel as if they were in Antarctica. The frost built up upon my goggles and the breeze burned my nose a bit. The frigid air made its way through my facemask and chilled my chest as I inhaled. My legs felt heavy as they were layered up with wool long johns, jeans, and Carhartt bibs. The blizzard was at its peak and all I could think of is “this is crazy.” I thought we were nuts for agreeing to do this walk. As we continued walking farther away from houses though, I could feel myself drift into my own world slowly. It didn’t feel like we were in city limits anymore. The visibility was low and the wind muffled any sounds of traffic that could have been near; as far as I knew I could’ve been in Alaska, Russia, or anywhere other than West Fargo. This is when we hit the tree line and took a quick breather. My heart was pounding out of my chest at this point and even the brisk air didn’t feel as cold as I was sucking wind. I was sweating like a farm animal and we were only beginning our walk through the woods. The conditions improved though and were more forgiving which made it easier to press on. My two coworkers, who are in much better shape than I, gained some ground on me while I bummed off their hard work and took advantage of the trail they blazed. Although I was unbelievably tired and my legs began to burn, there was something peaceful about this section of undeveloped wooded area that made me want to see more. I wondered what animals we might see taking refuge in this patch of trees to weather the storm and looked around at my surroundings eventually catching an owl in my gaze. This was pretty scenic to me as I had never seen an owl in Fargo and didn’t expect that to be the first wildlife I would’ve seen on this walk. I figured we’d see the usual jackrabbit or squirrel but instead a beautiful predatory bird likely seeking out its mouse supper as the sun began to set.

Eventually, I had to take a seat on a park bench as my heart was absolutely racing and my legs were on fire. I encouraged my coworkers to continue on without me and that I would gladly admire mother nature from the snow covered seat while waiting for them to come back around on the trail. As I sat, I cooled down and then “cooled down” turned to cold. I came to the realization that it was time to get back on my feet as a bit of survival instinct kicked in. I, again, felt as though I was in another world. I was now on a personal mission to make it back to the house at a slow pace as my coworkers caught up with me. After a short while, I made it back to the field we first entered through and looking back I could now see my coworkers making their way through the snow-covered timber. We met back up and finished our stroll. After getting back, we all enjoyed a hot chocolate while discussing our experience. I felt accomplished and felt absolutely no guilt at all in the sugar I was currently taking in. This eventually led to me joining my coworker for another walk a month or so later. Unfortunately though, we ran out of winter and I only got out twice. Now, read again what I said there. “We ran out of winter”. Who in their right mind is sad about something like that? That’s the beauty of it though, I had found something (other than my other winter love, ice fishing) that I liked and that helped get me through the winter.

We are now to the winter of 2019-2020 and I have actually been excited to get back out on my snowshoes. In fact, my wife and I are planning a winter camping trip for the first time. What we learned is that there are plenty of opportunities to get out winter camping and even just to take day trip to snowshoe for a couple hours. Many state parks have trails maintained for snowshoeing that range from 4 miles at Cross Ranch State Park to 14 miles at Fort Ransom State Park. Three different parks also rent snowshoes for those who do not have their own or are unsure if it’s something they want to invest in. If you fall in either of these categories then head to Cross Ranch, Fort Stevenson, or Lake Metigoshe State Parks for a $15/day rental. Many state parks also offer cabin rentals and can range from full service, rustic, or camping cabins all with their own unique features to accommodate all types of visitors. So if a day of snowshoeing followed by an evening campfire with a hot meal and warm beverage appeals to you then you have come to the right place! That’s right, North Dakota. Maybe you’re not ready to commit to heading out of town to give a new hobby a try and that’s fine. My experience in West Fargo was enough to get me interested in this ancient form of transportation. Start small at a city park if that’s what it takes to get out and get active in the winter.

Winter doldrums are a real thing and they can be curved by physical activity and fresh air. Anyone can give snowshoeing a try. I’d love to encourage everyone to get out and try ice fishing or snowboarding but that’s a bigger commitment and more challenging for most first timers. Snowshoeing though, is something for all skill levels and can be started small and worked up to weekend long trips if that’s what you wish it to be. We live in a state where it’s vital to remain active through the cold months. Even Theodore Roosevelt once spoke on the topic and if I haven’t been convincing enough, then take it from the North Dakota legend himself, “All life and wilderness is so pleasant that the temptation is to consider each particular variety, while one is enjoying it, as better than any other. A canoe trip throughout the great forests, a trip with a pack-train among the mountains, a trip on snowshoes through the silent, mysterious fairy-land of the woods in winter – each has its peculiar charm.” I couldn’t agree more and this winter I challenge you to go see what the beloved rough rider was talking about.